This experiment is to test the capabilities of using a joystick to control video and audio within Resolume Avenue 3.3.3.

junXion was chosen as the application linking the joystick to Resolume, as it offers the flexibility if required to utilise all functions of the joystick within Resolume.

The Speedlink SL-6612-SSV WASP² was chosen as an input device as it a unit with a large number of potential assignment controls, at a budget price (£14.99). Controls available on this device include:

To communicate with Resolume the joystick parameters were initially mapped within junXion as follows: 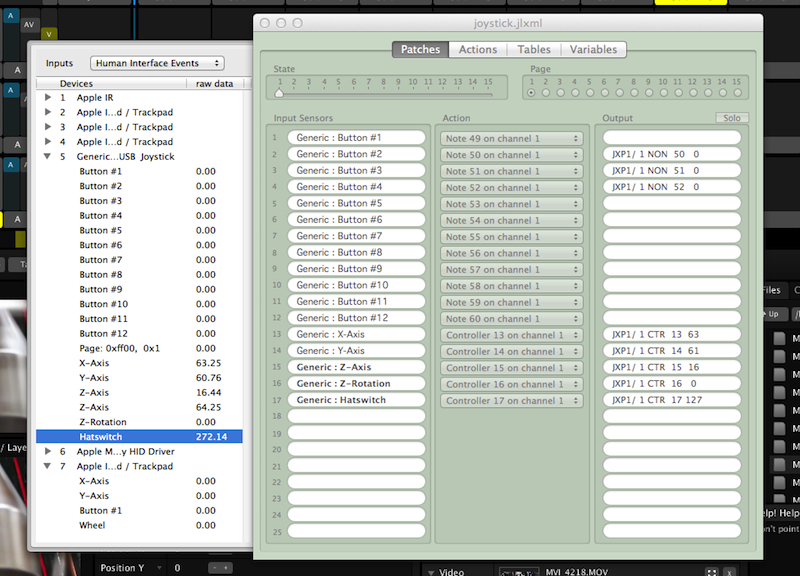 The features of the joystick lead to X-axis & Y-axis parameters controlling parameters with variable control, whereas the buttons are limited to two states (on or off). From an ergonomic perspective the following controls were chosen as the primary input controls to be assigned within Resolume Avenue:

The X-axis and Y-axis controls together allow for the following combination of states when the joystick is pushed 100% in the following positions:

Sweeping the joystick in a circular clockwise motion around the extremity of its range provides the following data:

So what does all this mean? In terms of using the device, pushing the controller joystick in a ‘top-left’ movement, or 315°, sets both the X-axis and Y-axis to 0. Moving the joystick in a ‘bottom-right’ direction, or 135°, sets both axis’ data output to 127. Sweeping the control in a clockwise manner allows control of a parameter whilst another parameter is set either to 0 or 127. This creates interesting potential when assigned to effects parameters.

Through experimentation it was found that the Pixels in Space effect was far from subtle. Although striking in its approach, this effect was not suitable within the current configuration.  A consideration would be to use an effect such as this through button 1, the ‘trigger’, which can be used (with ‘piano mode’ selected within Resolume) to turn the effect on or off rhythmically.

Performing with this configuration presented an opportunity to create an interesting range of visual effects by manipulating multiple video effects simultaneously.

Manipulating audio with this configuration, for this experiment, was achieved in a similar manner. Extreme delay was chosen to achieve an ambient, atmospheric effect purely through manipulating the audio within the source footage. Chosen for this experiment was the the Togu Audio Line (TAL) Dub delay effect, available as a VST plug-in. This was added as a global ‘Composition’ audio effect within the effect rack in Resolume. The feedback settings were accentuated to provide an extreme delay effect, with the ‘CUTOFF’ & ‘RESONANCE’ controls assigned to the X-axis and Y-axis respectively.