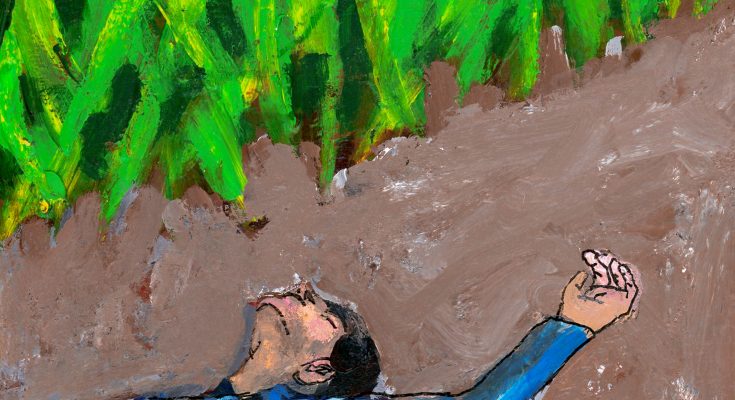 redBrocket is a new track released by thomTide. There’s something about this track I really like, I think it’s the combination of the songwriting, with it’s melodic ideas that remind me of 90’s britpop like Garbage, or The Cardigans maybe, or maybe it’s the poppy, electronica production. It’s only 1 minute 16 seconds long, so should we call it a micro-song?

thomTide is the working name of musician Lee Rutledge, who’s from New Jersey and now based in San Diego. Lee is currently building a project / album in which we’s drip feeding his tracks on a bi-weekly basis, in the same way that (pre-Netflix) we consumed TV shows, in an episodic way. We look forward to seeing how this progresses.

We wanted to find out more about Lee and his musical inspiration, so we asked hime to take part in a little Q&A…

redBrocket is pretty literal. I wrote it while watching a documentary on the Cerrado in South America. But it has parallels to human relationships and dynamics too.

I like to think of it as telling a story, like if you listen with your eyes closed what do you see and where does it take you. I try to be intentional about every rhythm, sound texture, chord, word, etc.

I won’t mature a song if I’m not in love with it at every step. Whatever the first thing is, whether it’s drums, chords, a bassline, I gotta be in love with it before I add the next layer. So I don’t make much more music than I release because I’ve already auditioned a hundred songs in the making of 1.

I think it’s in my family, a lot of teachers and musicians before me. I just always loved it. My dad used to go through all the stuff he listened to and it was always super eclectic. I don’t think I took music as seriously though until my friend Spence from back home really started pursuing it and he let me into his space.

Wow I’ll definitely miss some here. Hiatus Kaiyote, what they do with rhythm and soundscapes, they got it all and it doesn’t sound forced or unnatural. Joe Hisaishi, the guy who does Miyazaki’s movies. Daniel Caesar is so comfortable with keys, and I can tell from the crazy chord progressions he sings to, without ignoring key switches. Kendrick, Baby Keem. I could go on, I definitely missed a million other artists doing exciting things.

Hmm I haven’t given much thought to this haha. But I’ve worked with others in the past as a producer. The mutual excitement has to be there. I wouldn’t force anything but there’s so many artists who I’d love to work with someday. I know I’m thinking too hard about this haha, I’ll pick Frank Ocean.

Laugh Now Cry Later by Drake and Lil Durk, Ben’ Ova by WSTRN, Sunflower by Swae and Post Malone. In no particular order.

Song every 2 weeks till next year. Hopefully more content announced as it comes together. Thanks guys.