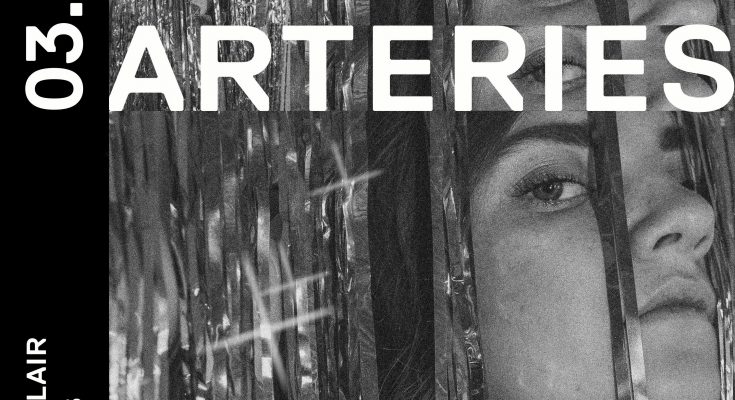 Sophie Blair Her third single “Arteries” stuns and mesmerises whilst honing in on her raw, honest vocals and driving electronica production.

At 22 years old, Sophie has managed to live a rather experienced life as a creative, young multi-talented singer-songwriter and violist from Provo, Utah. Provo is a small town with an unusually vibrant music scene, such as Velour that’s always packed with energetic pop kids just like Sophie.

She grew up as a Mormon, so she briefly attended a Mormon university with the intention of majoring in classical music. She eventually left both college and the LDS faith, but practicing music stayed a huge part of her life.

Shortly after, Sophie started getting asked to play shows as a solo singer-songwriter where she played viola through a loop pedal to accompany her pop songs. Heroes from the music scene that she loved as a kid started reaching out, asking her to play viola on their sets even though she was still a teen.

Shows led to festivals, playing in LA, writing, recording, arranging, and touring. She performed with The Killers, Bruce Springsteen, Mindy Gledhill, Train, The Moth & the Flame, Fictionist and Joshua James.

When Sophie sat down to record her debut EP, she had a folder with 40 finished songs. She worked with Grammy nominated producer Nate Pyfer over a month of 12-hour days, labouring to make a product that sounded the way she had felt during her adolescence – a combination of hurt and loss, transformation, but also complete and irrevocable joy.

Her debut single “Don’t Be Like That!” showed a playful, electro indie-pop stance, reminiscent of Robyn, Fickle Friends, and Sigrid all merged into one. This next single follows suit with strong songwriting and a catchy guitar riff-driven electro-pop make-up. The second single “AIR I BREATHE” made waves in the blogosphere as well.

“I’d made my way home from a party after a bad breakup and was feeling emptier than I’d felt in a long time. I remember sitting on my bed with all the lights off, in my party clothes, then pulling out my guitar while starting a voice memo on my phone. I felt physically exhausted from the breakup and from the height of emotion I was experiencing. The lyrics to Arteries came so fast it felt more like journaling than songwriting. “I don’t wanna be here.” “I have never been a drifter.” “I miss you so much my body might break.” It was, in my own way, a shaky confrontation of the trap I’d built myself: so dependent, so attached, and so anxious that every sliver of distance I experienced felt like an emotional mile. I think more than anything I was trying to process that feeling of distance — being so physically close to someone you can touch them, but so emotionally far you don’t know if they even know you anymore. By the end of the song, painful, frustrating, and sad as it was, I remember feeling a strange and displaced sense of calm. Somehow, I’d come to grips with how I felt — with the depth of it all, and the fear, and the constant wishing it away and accepted it. I remember taking a breath, putting my guitar down and immediately falling asleep.”