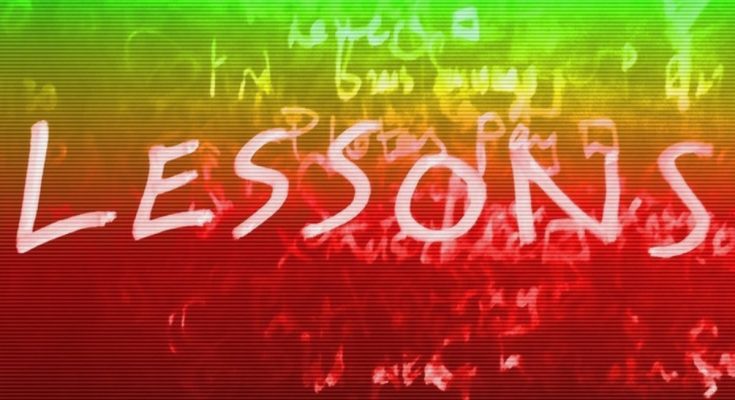 We’ve featured Glasgow based Bricolage quite recently with their release of Dark Fidelity Hi-Fi by Machine Blossoms. We were impressed by that release and now equally delighted to feature Lessons, the debut album by Manchester musician Sarmism.

Lessons is an album that combines a mix of ambience, bleepy IDM, glitch aesthetics, fractal beats, hazy electronica sounds and techno. The album was made predominantly on modular synthesisers and samplers with many of the tracks recorded ‘live’ in one take.

Here’s Homed Rag, which reminds me a little of The Orb, only a little more techno, with it’s percussive grooves and occasional delayed vocal samples thrown into the mix…

My favourite track is probably Full Focus Kite Flyer, a track with ambient leanings, overlaid with retro synth parts that could have been taken out of an 80’s sci-fi movie. It’s complemented by drum & bass / IDM beats that syncopate nicely, and dubsteppy wobble in the bass that finishes things off nicely…

We asked Sarmism to answer our Q&A to discover a little more about his music, processes and inspiration…

Lessons was written during a pretty testing time in my family’s life. It chronicles our home learning journey, which for various reasons preceded Covid by several months. You might say it is a voyage through society’s difficulty accepting a little girl(‘s neurodiversity), the impact near and far, and our journey towards catching our groove (and coming closer together as a family).

There’s always ambience and there’s always rhythm. There are usually syncopated or polymetric sequences. Detuned analogue synths often muscle their way in. I like Fminor and D Dorian.

It almost always starts with the groove. Not necessarily (although often) beats, sometimes just some rhythmic field recordings or glitches. I love resampling, so have lots of clips of my modular or synth jams, noodlings on software (Reaktor) or iPad synths (Samplr) which I then mangle and remangle with various modules and granular samplers. I arrange almost entirely in hardware, again usually modular synth or an all in one amazebox called the Deluge. There’s often a performative aspect to the compositions and I like to arrange on the fly if I can, sometimes just recording the stereo output for mastering and release.

My parents, God, Freddie Mercury, Liam Howlett. There was always music in the house and they encouraged me to start playing piano at a young age. It then just grew, evolved and developed the more different styles of music I was exposed to growing up especially in a traditional religious context. I also remember seeing bands like Queen and Dire Straits on music TV which got me more into guitars and later I started playing indie and rock with friends. Being a relatively solitary only child, making electronic music on the computer was a natural progression from all that, inspired by going to clubs, hearing sub bass and the Amen break. After 20 odd years making music with computers, I began to explore hardware synths and realised that, for me, they offer a wonderland of exploration and creation.

Nils Frahm…his live show is spellbinding, his gear list immense, and I’d love to learn how he creates such simple yet complex works and melds all that equipment into one unified orchestra.

Eurorack modular. It’s possibilities are unlimited. You can literally create the instrument you want to make. Desert Island Synth is the Synthstrom Deluge though, it’s battery powered and does everything – synth, sampler, sequencer!

Moderat. The combination of songs and subs…also lasers.

I’ve pulled my patch apart since ‘Lessons’, and the next step is to figure out a workflow that I can use to give me enough creativity, but also versatility to make something new. That means lots more sampling, field recording and resampling. I’m hoping to do some more live streaming too. There are several streams archived on my YouTube channel and it’s a great way of keeping productive and creating, plus staying in touch with people musically in these isolationary times.