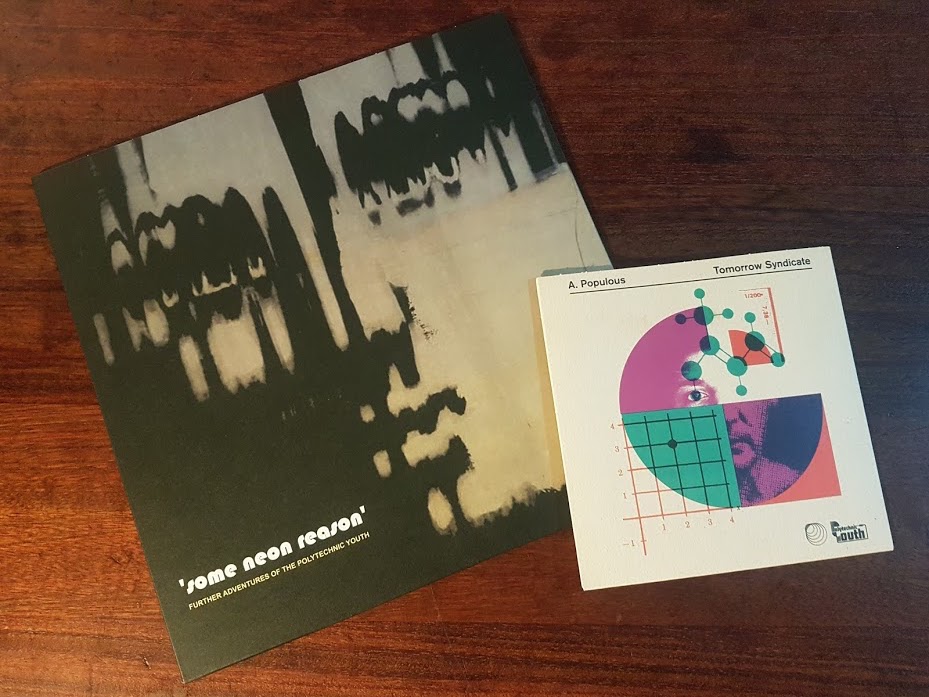 I was excited to receive the latest delivery at Electronica Towers, a double pack of vinyl from Polytechnic Youth. This included the newest 7″ from Tomorrow Syndicate, called Populous, and their latest compilation album, ‘Some Neon Reason’.

If you’re not aware of them, Polytechnic Youth is a label that releases short runs of electronic music, with a focus on retro, library-music and komische / krautrock inspired sounds on vinyl.

The first thing that you notice with release is the quality of the artwork, a fantastic, retro design by Nick Taylor, which really sets the tone.

Listening for the first time, I’m immediately taken back to the late 70’s, in a Buggles kind of way. After a brief flashback I’m pulled back into appreciating a great synth-pop track. It’s a little bit Krautrock, a little bit New Order, with a great video to accompany it too.

The vocals are laid back, delivered with subtlety, the drums are simple, yet solid. What gives this depth is the multi-layered synths, with great raw analog riffs adding layers of texture. Towards the end guitars punch through the mix adding some beef before the end chorus. It’s a great track.

The B-side starts with a bass-groove and strings before a couple of synth layers add to the mix, with melody again from synths. It’s dynamically well structured, and feels like a song, although in some sections transports me back to movie soundtracks of the 80’s.

Both sides of this release are great, I almost prefer the B-side, you’ll have to buy the release to give this a spin though. Do it!

Populous is available as a limited pressing of 300, which has probably already sold out. You can get a digital copy from Bandcamp.

Some Neon Reason – Further Adventures of the Polytechnic Youth

According to Polytechnic Youth this was a collection of tracks that were planned to be released as a series of 7 & 12-inch releases, but due to COVID throwing the world into chaos, it was decided to release them as a compilation album. This release is a limited edition of 500.

First up is Phil Wave with ‘Hacking Sequence’. It starts off with a pulsing synth-bass, drums adding to the mix later before wavering synths add to a brooding texture. It’s all quite dark and menacing, my Mum wouldn’t like it at all. I think it’s pretty cool.

Next we have ‘Contempt’ by Klaudyna Pop, more synth bass intros with some great spoken vocals and synth riffs that happily sit over the jarring bass riffs. It’s a great alternative 3-minute synth-pop song.

The first of two extended tracks from VIB close side one. This one being more ambient in approach than the previous two tracks, which is a great contrast. Reminiscent of Klaus Schulze and Tangerine Dream, although a little edgier, a wonderful way to finish side A.

The second side begins with a great slice of French Synth Pop with ‘Marcello’ by Recidive Noire. It’s simple synth lines and drum machines with a wonderful retro groove. The breakdown in the middle provides a complementary distraction to something that sounds like great 1980’s DIY pop.

Soloist Anti-Pop Totalization is a great name for a band. It’s the work of Japanese musician Rikinari Hata who provides a more experimental approach to this compilation, with solid repetitive synths and drum machines underpinning effected vocal sounds. Another one my Mum wouldn’t like.

The compilation closes with another extended track from VIB, this one called ‘The Deep i’. Clocking in at over 12 and a half minutes it’s an epic track starting with looping industrial sounds before layers of synth building to create an intense psychedelic soundscape. Check it out below…