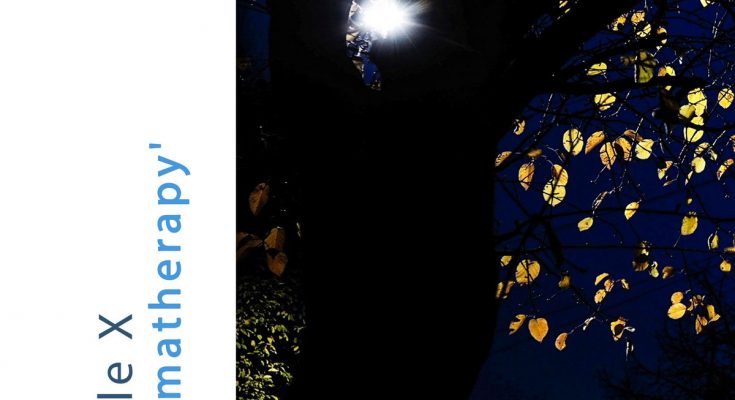 We’re delighted to bring you a new track from Fragile X, taken from his new ambient electronic release on See Blue Audio. Reflective Vibrations is taken from the EP Chromatherapy, and is due to be released on 20th November.

Reflective Vibrations – it’s a beautiful ambient track, it builds wonderfully, with some great layers and textures in there. It’s got a little bit of percussive rhythm to help it along nicely. It’s got elements of Selected Ambient Works, with a little nudge towards KLF’s Chill Out or early Orb in there too…Get yourself a cup of tea (or whatever your poison is), and for the next 6 minutes sit down and relax…

We caught up with Fragile X to find out a little more about the release, and to discover more about one of Glasgow’s finest electronic musicians…

My new EP is titled “Chromatherapy” and is based around the concept of colour, light and sound as one entity. Colour has always played a massive part in my music due to synesthesia. I’ve made a few tracks before that are directly influenced by the experience but this is the first time I’ve centred a whole release around that concept. “Chromatherapy” is also the first time in a while that I’ve gone all-in on the ambient side of things. I usually like to have lots more rhythm in my music these days but it felt natural to let the melodies and space do the expressive work on this one.

A hard question. At the risk of sounding pompous or cliched I don’t really think my productions can be easy to describe and I like it that way. Depending on my mood at the time I can end up working on something cinematic and downtempo or I can veer into the more experimental side of things with weird time signatures and strange noises. This year I’ve put out some ambient, some breaks, glitchy IDM kinda stuff and some industrial soundscape material. It really can vary pretty wildly. I’d like to think that most of the time I sit on the fine line between chaos and calm.

Again, this can vary wildly. Can you see a pattern emerging here? To be honest though, the majority of the time I’ll get a concept in my head (usually inspired by something I’ve read/watched/imagined) and I’ll then set about working on a sound palette that I think compliments that concept. Once I have a library of sounds I’ll then begin the process of deciding which ones work best together. This can often lead to a lot of swapping, resequencing, chopping and changing. Other times, I’ll just sit down and muddle around with sounds until something sounds good then I’ll save it for a rainy day! I have a folder full to the brim of 30-60 second musical ideas that date back almost a decade. I occasionally dip into them for inspiration.

Music has always played a pivotal part of my life. Like many others, I was always stitching together mixtapes and mix CDs as a teenager. I’ve always been a huge fan of listening and still am to this day but the urge to create only really hit me when I was around 16-17. Labels like Skam, Warp and Toytronic were inspirational in that sense, along with more mainstream acts like The Prodigy and Fatboy Slim. I remember getting my hands on a cracked version of “Renoise” back in the early 2000’s and that’s when I started mucking around with sounds but didn’t take electronic production even semi seriously for another 3 or 4 years. I’ve always been a fan of shoegaze and I suppose you could say that joining a band on guitar was my first real step into the creative side of music. Being in a band was fun while it lasted but once I had the confidence to start branching out on my own I never looked back.

Waaaaay too many to name but off the top of my head…
Producers: Aphex Twin, Boards of Canada, Secede, Skee Mask, Burial.
Bands : Deftones, 65 Days of Static, Eighties Matchbox B-Line Disaster, Kyuss, Tool.

Roel Funcken has always been someone that I’ve admired and would love to sit down with. Even if it was just to pick his brains. Doing a track with him would be a bonus!

Despite all my electronic endeavours the piece of equipment I can still find peace with at any point is my old trusty acoustic guitar. I was given it second hand as a present from a neighbour when I was 16 and it’s still in decent nick almost twenty years later. In terms of software, I’ve always been a sucker for the Sonar Cakewalk DAW and Camel Audio plug ins. Both now sadly defunct, so to speak, but I still mainly use Cakewalk as a sequencing DAW, albeit without any updates. I have dipped my toes into Fruity Loops recently while working on a collaborative project with my friend, Boom Merchant. I can see myself investing in FL software soon.

I can count the number of times I’ve performed live solo on two hands. I’ve never been a huge fan of playing live so this is something I’ve never really given much thought to. I guess opening up with a nice IDM/ambient set for BoC would be a dream of sorts. Given that they haven’t played live in almost twenty years and almost certainly have no idea who I am then I think that’s likely to remain a dream!

Right now I’m going through a nostalgia phase with the Toytronic label and have actually just finished curating a massive mix of their label back catalogue that I plan on making and posting online this weekend including artists like Abfahrt Hinwil, Point 7 and Ochre. I’m also hugely into the ever consistent Disintegration State label. Some of their recent output from the likes of Jermainesoul, FLVZ, Mute Branches and Adventsong has been phenomenal. They’re on heavy rotation. The “Ancestral Origins” album from Minimal Drone GRL that we released on my Bricolage label earlier this year is never far from my playlist too. I use it to switch off and escape to another world regularly.

I’m currently finishing off bits for a release I have coming out next year on the excellent Soundtracking The Void label. I don’t want to give too much away but it’s an album that I’m really proud of and looking forward to getting it out there. I’m also working on the aforementioned collaboration with Boom Merchant. This is some of the heaviest stuff I’ve done to date. Real murky techno material. I also have plans to finish off some tracks for other labels and finally I’ve just started the process of putting together plans for an album on Bricolage around a year or so from now. It’s been in the pipeline for a while but I’ve only just got round to putting the plan in motion.

Massive thanks for having me Matt!