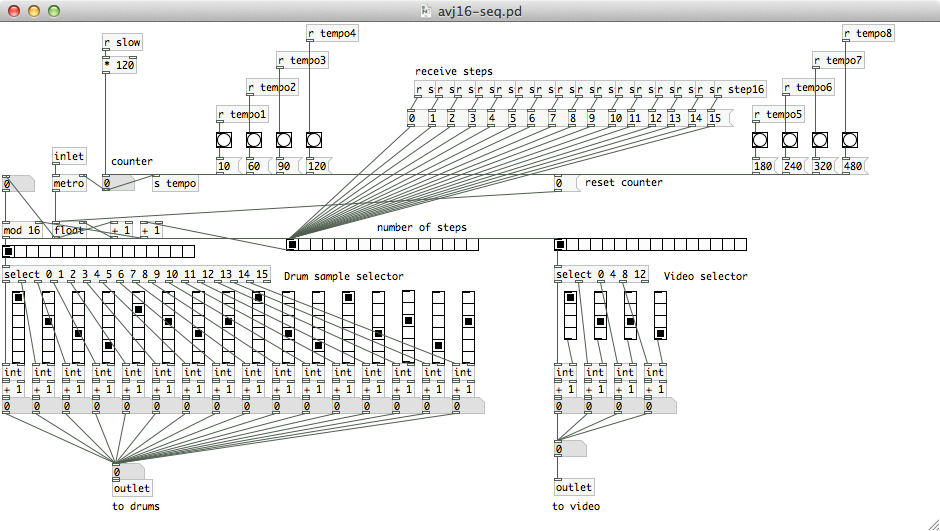 AV16-4 was created as a custom performance tool to experiment with performances interfaces and tools. Using Pure Data as a development from previous work using Resolume Avenue gave an opportunity to be in full control of the hardware and software signal flow and to create something unique for the end user.

video4channel.pd is a 4 input video player. The patch accepts an input from the inlet and using the select command triggers a video file loaded into channels 1-4. This is sent through gemhead and pix_film into pix_mix.

In order for video to be manipulated within a performance situation there are a number of parameters that can be assigned to controllers:

Experiments were made initially using 16 video inputs, correlated to the 16 audio files. This was found to very resource hungry for the test machine to handle, resulting in failed video playback. The video section of the sequencer patch , as well as the video patch were reduced to 4 channels to achieve a usable result. To match the audio elements to the video sequencer elements, sequence parts 1, 5, 9 and 13 were mapped to video parts 1, 2, 3 and 4 respectively.

a second select function takes steps 0, 4, 8 and 16 feed 4 vradio boxes of whose values are fed to the video4channel patch. In this way a 16 step sample based loop can be created and edited in real time, whilst also triggering video clips every 4 steps. These sample and video sequences can then be edited within their own patches.

To aid usage of the sequencer within a performance situation some extra functionality was built into the sequencer:

All three of the Pure Data patches shown here are in the form used in conjunction with iPad control. A custom TouchOSC controller patch was used which aimed to bring together in one panel the functionality of all three elements of the instrument (sequencer, drum machine and video player). OSC data was routed through a network of send and receive commands as shown through the screenshot below:

The following image is a screenshot of the interface created within TouchOSC. As you can see, the top dial control is assigned to video manipulation, with a step control below. At the bottom of the interface are video channel controls, alongside individual delay line faders and reverb level controls.